during the summer, we were busy trying to get the marketing of AtavachroN up to a sufficient speed when we found our rehearsal room drenched to the very last corner… As a redemption, an amazing review was writen by musikreviews.de.

This summer, Berlin was afflicted by several massiv storms including downpours that haven’t been seen yet. Pictures like these were agenda: 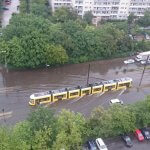 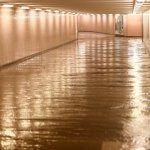 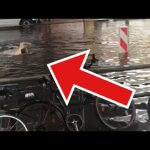 As our rehearsal room was located in a basement, we were obviously worried. But since the first heavy rain left our room unharmed, we became complacent. Nevertheless, we lifted our equipment up, just in case…

This was dumb luck, because subsequent storms let to a water ingress. As a result, the floor was drenching wet and the room cannot be used anymore. Renovations will take a lot of time, keeping us from working on new material. In addition to this situation, we have been doubtful about the room anyway, as it is located in a rather insecure neighborhood.

So we decided to vacate the room and move to a new one.

We not only decided to move to a new rehearsal room but also to reorganize the way we rehearse. Meaning, we go all silent – edrums, interface, everything directly and individually sent to our ears. That means a whole lot of change! But we tried it and it is cool.

However, such changes obviously take time and strength, which cannot be used to do, what we love to – making music.

So you can imagine how excited we were when we became aware of the first ever review written about our “baby” AtavachroN! And it is not just the first review about our album, it is an amazing review, flattering, laudatory,… Heck, we cannot express how exciteed we are! – 12 out of 15 points – Amazing! And as if this is not enough to be proud of, “Train of Thought” from the (once) magnificent Dream Theater only made it to 11 out of 15 points.

For all the trouble caused by the water ingress, this really is a pleasing redemption. Thanks universe 😉 And thanks to musikreviews.de for these kind words.

With this tailwind, we hope to get started as soon as possible in our new rehearsal room.

We use cookies to ensure that we give you the best experience on our website. If you continue to use this site we will assume that you are happy with it.OkNoPrivacy policy